2020 Olympian Evita Griskenas (Orland Park, Ill.) led the rhythmic senior all-around field by nearly 12 points, earning a total score of 253.650 across two rounds of hoop, ball, clubs and ribbon. She picked up national championships on hoop and clubs and was the runner up on ball and ribbon earlier in the week. Griskenas’ NSR teammate Lili Mizuno (Northbrook, Ill.) earned the senior all-around silver medal, the silver in hoop and clubs and the gold in ribbon.

With nearly 30 medals going to NSR gymnasts at the National Championships and with so many promising young athletes from other clubs, too, NSR coaches see a strong future for USA rhythmic. “The next generation is making tremendous progress and getting excellent results internationally,” says Klimouk. “We’re excited that the popularity of this beautiful sport is growing here – and that NSR athletes will be an integral component of the strength of the USA rhythmic program in coming years.” 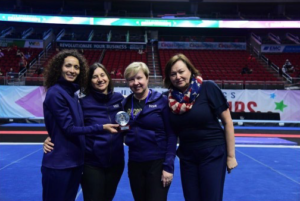